Fans think Emily Bieberly from 90 Day Fiancé was drinking alcohol while pregnant during her wedding with Kobe Blaise in the finale. Emily, 29, met 34-year-old Kobe during a short stay in China where she was teaching English.

Emily and Kobe fell for each other hard and fast after a one-night stand, and were soon engaged.

Within a few weeks, Emily found out she was pregnant with Kobe’s baby. She returned to America, Kobe went to Cameroon, where he’s from, and waited for two years to see his partner.

It was only after their son Koban turned 17 months old that Kobe got to meet him and Emily on 90 Day Fiancé season 9.

Emily's trust issues caused many differences between her and Kobe. Instead of compromising, she mocked and humiliated Kobe.

Fans urged Kobe to leave Emily and go home, but the couple became pregnant again. Emily and Kobe knew a second pregnancy before marriage would shock them because they lived with Emily's parents in Salina.

Emily's dad David didn't know about her pregnancy, but she hid it out of guilt until the wedding. David wanted Emily to stay childless while he supported her new family.

Her parents David and Lisa, and sister Madeline found out five days after the wedding.

Fans spotted Emily drinking from champagne flutes at the reception and called her out. Reddit user u/Disastrous-Owl-2358 said Emily was "obviously drunk" at the wedding. 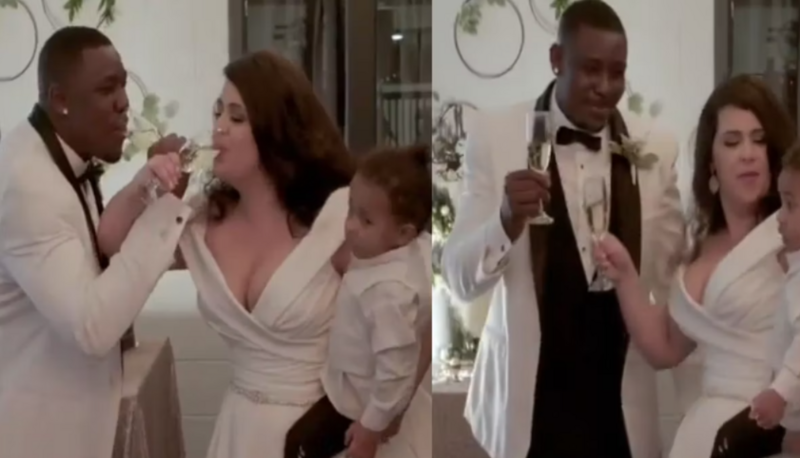 "She couldn't get worse," they said. u/peachhcoblerr thought Emily looked "very sloppy" in the confessional with Kobe. u/MyYakuzaTA called Emily "irresponsible and immature."

"The frequency and nonchalance with which alcohol is tossed back on shows like 90 Day Fiancé, The Bachelor, and America's Next Top Model desensitizes it," says Dr. Jenn. "It looks even worse when someone is pregnant; they should fire them all."

Kobe's Instagram video of him, Emily, and their family in a limousine after the ceremony shows Emily pouring a drink.

One of the top comments on Kobe's IG post reads, "Congratulations - but I hope that's non-alcoholic bubbly."

Emily previously said she bought non-alcoholic beer for the rehearsal dinner so no one would know she's pregnant.

Another 90 Day Fiancé fan said no one should comment. They added, “You don't know what her doctor said.”

David and Lisa didn't like hearing that Emily was pregnant because they felt they should have been more established before having a second child.

Emily's mom wanted her to move out because she was pregnant. Madeline said Emily exploits her parents.

Emily's recklessness doesn't mean she doesn't care about her child.

The 90 Day Fiancé Tell-All may answer questions about whether Emily and Kobe are still living with her parents, and it may also reveal their new baby daughter.

Not sure what to read next ?